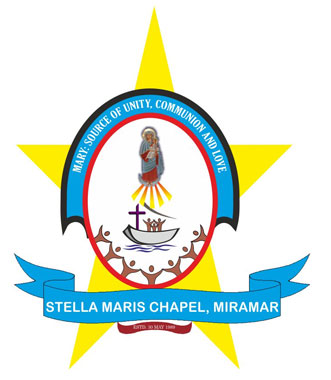 The oval shape of the logo indicates the world we live in. On its periphery is the vision of the Stella Maris community. Inside the circle, above the Boat, is the picture of Stella Maris, our Patroness. The Boat symbolises the individual Christian home in our chapel area, stressing that our life is a journey. Day-to-day life temptations should not block our vision and focus which is Christ her Son. The seven persons holding hands represent the seven zones of our Chapel, living the faith in unity and forming a community of love. The star which forms the backdrop invites every member of the community to shine like our Patroness, Mary. Through her intercession we plead for divine grace from her Son Jesus. At the foot is the date of the establishment of this chapel. The logo was visualized by Bro. Franky Fernandes (a seminarian resident at the Chapel from 2010-13) and designed by Alvito D’Costa from Panchwadi.

The icon of Our Lady Star of the Sea was painted in the neo-Coptic style by the internationally renowned iconographer Dr Stephane Rane. The Coptic icon is the direct heir to the spirituality of the Desert Fathers who were the first Christian monks (2nd to 7th centuries) and lived in the deserts of the Middle East. They led a prayerful and reflective way of life and developed a spirituality which shaped many monastic rules, such as that of St Benedict. St Jerome was a Desert Father and in his writings he identified Mary, Mother of God, as the ‘Star of the Sea’.

The icon is set in the context of the Night and reflects the difficulties of life, sensed more deeply at night, and perhaps also the times of the ‘dark night of the souls’.

The Star is Sirius, the largest and most brilliant star in the heavens. It is a major star of navigation but also known in mythology as the God Star or the Dog Star that leads. This star has been an object of great worship in many cultures around the world. In the Middle East the rising of Sirius in the heavens in June coincided with the annual floods of the Nile upon which the lives of the ancient Egyptians depended. The visible circulation of the minor stars Sirius A and Sirius B around Sirius itself were also part of this worship culture and form the basis of the Star of David symbol.

The Virgin and Child are positioned in the upward pointing triangle of the Spirit linking to Sirius. Mary is herself the star which illuminates darkness and leads our souls to her divine Son.

The Sea has been the most feared elements of nature because of its enormous power to sustain life or destroy it. We are powerless and insignificant in the midst of its range, yet in its benign aspect, the sea is a source of untold beauty and nourishment for mankind. The sea is therefore a metaphor for life and its perils but also its wondrous joy and beauty. The worldwide ocean also represents all the people of the world.

The Four Fish are a reference to the four Gospels and ultimately to Christ Himself who was known to the early Christians as the Great Fish (Ichtus).

The Boat is also an image of the Church Militant, navigating through time, through life and to the Promised Land.

Our Lady is depicted standing on the Moon again an object of worship in ancient religions. The image also recalls the verse in Revelation, Chapter 12: “and there appeared a great wonder in heaven, a woman clothed with the sun and the moon under her feet, upon her head a crown of twelve stars”.